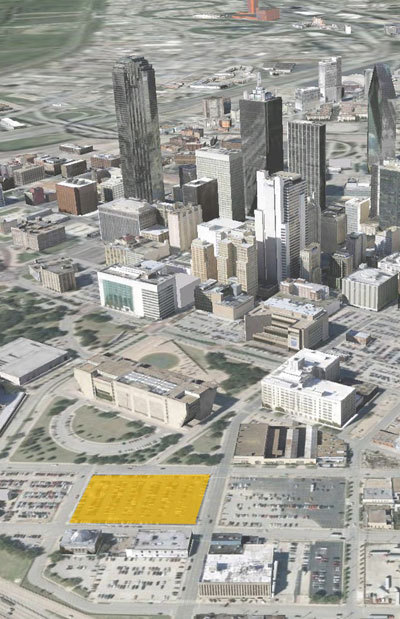 Bercy Chen Studio recently competed in the [http://www.urbanrevision.com/competitions/revision-dallas Re:Vision Dallas] design competition. According to the competition brief, “Re:Vision Dallas is a chance to propel design beyond the typical, beyond the norm and to lay the foundation for a future of sustainable development we all hope is inevitable. It’s a chance to create a block that does no harm, to people or place. A chance to encourage and value relationships, while fostering respect for nature and our neighbors, privacy and resources, economy and consumption. It’s a chance to change how we live and connect, how we interact and collaborate—how we live in a space throughout our life and the life cycle of the space.”


The Re:vision Dallas competition requested a self-sustaining city block in a downtown without very many of the things that normally make city centers successful. Our proposal sought to establish an icon for this part of downtown both to draw people to the site but also to serve as an architectural proposition that accounts for the ambition of the competition brief


The organizers’ request for a realistic proposal suggested a strategy of phasing out the work. Not only may phasing be necessary fiscally, it is a way for the project to evolve over time with respect to its urban viability. Change will bring with it all the complexity of reality, and a proposal which allows for evolution in response to external stimuli should end up being more robust and whole.


Our competition entry explored a range of housing types from single family to efficiency units. In a global perspective such housing typologies are not new. However, the idea of moving a suburban typology to downtown Dallas and arraying it alongside urban sleeping pods is a novel concept in Dallas, Texas.


Our proposal suggested the potential of collaborating with a social service organization. We utilized this component as a way to begin thinking about new modes of housing and shared space (the shared kitchen or assembly space for example). Additionally, such an organization’s focus on training and life skills was a perfect combination with the larger scale urban farming component of the proposal.


Our proposal sought to involve a high degree of systems integration which, when combined with the program requirement of zero waste-water runoff, suggested a development which not only harvested rainwater, but which utilized it as many ways as possible.